One step at a time

The last week, is that all it is, has been tumultuous. A series of waves of varying size crashing onto shore, I could now slip into constructive vs destructive wave theory as I would when teaching coastal processes, but I shall resist. Each day I talk / reflect with a wide variety of people online through this blog, Twitter, Facebook or LinkedIn.

Yesterday was a step, a bigger one than it sounds if you say the words. School had confirmed that my employment would finish on 31 December. So I needed to complete my exit, as mental health is keeping me from returning, by going in, returning my key and some papers and texts, and taking home my property that was in my (former) classroom.

My wife went with me. We met the Site manager and Business manager at 7am, before staff arrive. They were both very supportive which I appreciated and thanked them for later. We gathered my Lego boxes, the whiteboard globe, the hug-a-planet and my older texts and map collection I had used for open evening. I had to be slowed to make sure I was taking all my things. I held a focused view on the things I wanted to take home, but it was a surface scan because it felt almost wrong to be in the building. We carried the stuff down and put it into the car boot. Now we have two cars with school related stuff in boots neither of which I am ready to remove and deal with yet. At the time the process went well.

We headed into town and tried breakfast at the High Street Cafe recommended in the Swanage Facebook group. It was a great breakfast with reading material to peruse about the area. We had a breezy walk on the seafront noticeing the shops / galleries we have yet to visit and commenting on the next bank branch to close in the town. The reality of the closure that today’s visit showed was starting to catch up a bit. The school buildings are on the main route into town but I can manage driving past, as long as I don’t dwell on what they represent.

The remainder of the day included lots of observing horizontal rain from indoors, commenting on the strength of wind gusts and how plants transmitted the movement of the wind through their stems,especially the stands used for the pheasants. Impact hit home more and more. I sketched a bit, even breaking out my coloured promarkers although the pen and ink drawing was better. 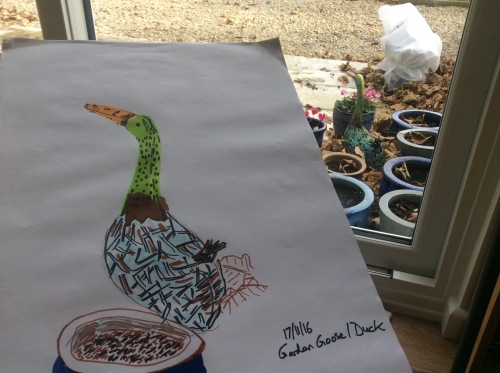 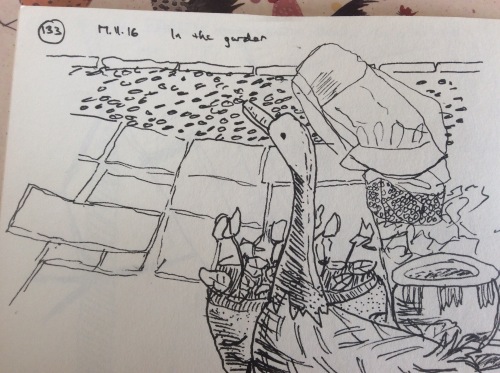 I read articles from local papers, I researched online about volunteer opportunities but realised and observed by my wife that I was in danger of diving in headlong and overdoing it with that too, she’s right. Some time to pause first and then one step at a time. I slept later and failed to do some ironing as I had promised but completed some tasks, like getting the last of the CDs and LPs onto the shelving.
Throughout the day we chatted and made some plans for today some of which will be completed others will be postponed as today is a slow start. I admitted I had made a pact with another male at the support group on Wednesday, that I think will become a good ongoing support, that neither of us were going to try the suicide solution to our woes. I committed this to Twitter and have had many responses.

It has made me think again about solutions, ways forward. Many of you are right I need to grieve the loss of a career which has dominated 30/52 years of my life. Around that as a family we have dealt with many difficult issues too. A marriage that has been so much about other people and now hopefully a chance to go back to being a couple.

I can not thank my immediate family, and friends online (many of whom I have met in the #real world ) enough for all of your support. I watched an action movie last night, it did divert my attention. At one point for a drink break I read an email back from school that triggered a flood of tears, the ones referred to above – the chronology of events are somewhat muddled. I stayed up reading online articles in magazines thanks to Readly an online and much cheaper alternative to reading a very wide range of magazines.

Today – recycling depot visit, a tea /cake shop treat, the haircut I have been talking about all week yet not got around to, moving Fern (our tree fern who moved with us) who needs repotting and moving after being blown over yesterday.  The day is starting to include sun against a darkening sky contrast.

I think that’s enough for this post. Apparently this honesty online is Inspiring to others and for me it is a release, it really doesn’t matter if no one reads it. It is a record in time of where I was at.

4 responses to “One step at a time”

Artisans on the Beach, Swanage

Local creatives on the seafront

A study of the picturesque Purbeck Village near Corfe Castle

where we run to

sustainable papercraft, illustration and the journey of the creative process in wellbeing

into the early hours

a selection of writings on mental health, chronic illness and creativity

Welcome to my world.

my art and photography from Dorset

somewhere on the spectrum between musing and ranting

A poem a day penned by @PookyH

Eye Will Not Cry